Formal Minutes
In formal meetings, decisions are reached through motions. Motions are proposals placed before the members for debate and voting. These must be recorded verbatim.
When you are organizing the minutes of a formal meeting, they follow the same organizational pattern as the steps in a formal meeting.

Heading
The heading should be one inch from the top of the page. Each heading line should be centered and typed in the style preferred by the organization (either capitals or uppercase/lowercase letters).
The heading should include the word “Minutes” and the name of the group or committee holding the meeting.

Introductory Paragraph
The place, time, and date of the meeting can be in the heading or in the introductory paragraph. (If the place of the meeting is always the same, it may be omitted.) There is no rule about which line should come first, but be consistent. Use the same style for all of an organization’s minutes and agendas.
The minutes should also state whether the meeting is a regular (weekly, monthly, yearly) or special meeting.

Attendance
Include the names of those who attended as well as the names of those invited who did not attend. These can be listed casually or in alphabetical order. List people who are not regular members as “In Attendance.” You should also record who chaired the meeting, as well as your name as the recording secretary/note taker.

Minutes of Previous Meeting
At the beginning of the meeting, the chair will ask the members to approve or amend the minutes of the last meeting. You can record this decision as a motion. However, it is preferable to use one of the following standard forms:

Reports
This includes any reports received from any of the groups’ officers or committees. As minute-taker, you must summarize any reports or other documents presented at the meeting and then either attach them to the minutes as an appendix or refer to them in the minutes as “filed.”
If a report was sent to the group for information purposes only, indicate the report was “received.”
If a report was presented orally, or accompanied the report with a verbal explanation, indicate the report was “presented.”
If the report contains a statement of opinion and facts, and concludes with resolutions, then you should record that the report was “adopted” or “accepted.” A report could also be “considered” if the group wants to look at it further.
When the group decides to “adopt” a committee’s resolutions, enter the resolution in full into the minutes. With a particularly important report, the group may order it “to be entered into the minutes.” In that case you must include the whole report in the minutes.
After someone moves either to accept or to adopt a report, the report is then open to amendment by the group.


Correspondence
Letters, faxes, and e-mails sent to the group are usually read by the secretary and either filed or attached to the appendix of the minutes. Telephone conversations may also be handled in this way.
Unfinished Business or Business Arising from Previous Meeting
This involves motions or issues brought up at earlier meetings and deferred to the current meeting, details of follow-up, and new actions as a result of previously handled business.

New Business
This portion of the meeting is devoted to the introduction of new information. It may also include handing specific tasks to specific members of the group and setting deadlines.

Adjournment
The chair may call for a motion to adjourn or may adjourn the meeting themselves after ascertaining there is no further business.

Next Meeting
Record the date, time, and location of the next meeting.

Signatures
Highly formal groups still prefer, “Respectfully submitted,” before any signatures, although this is usually omitted for other groups. However, the minute-taker’s signature and title should appear at the end of the minutes. The minute-taker may also choose to include the date when the final preparation of the minutes was completed. This is optional.
In formal minutes, the chair initials all pages of the minutes and signs the last page to prevent any alterations. 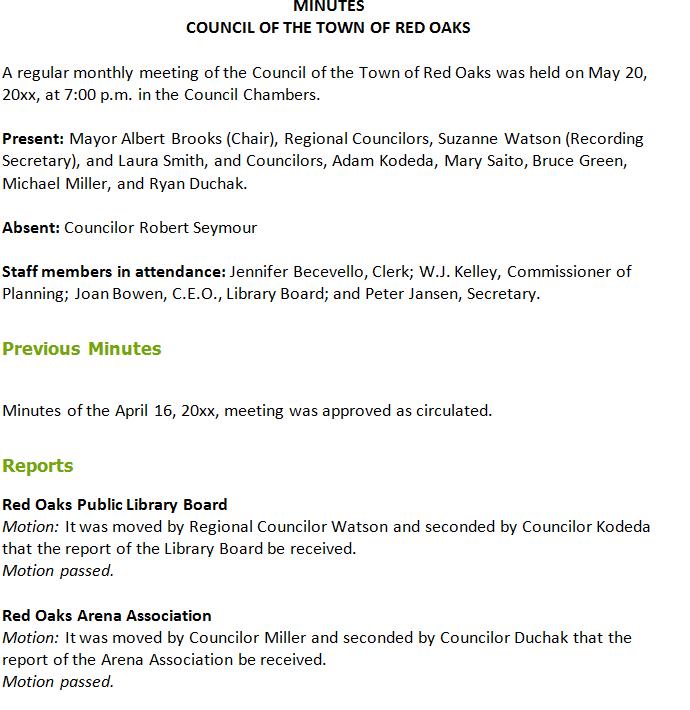 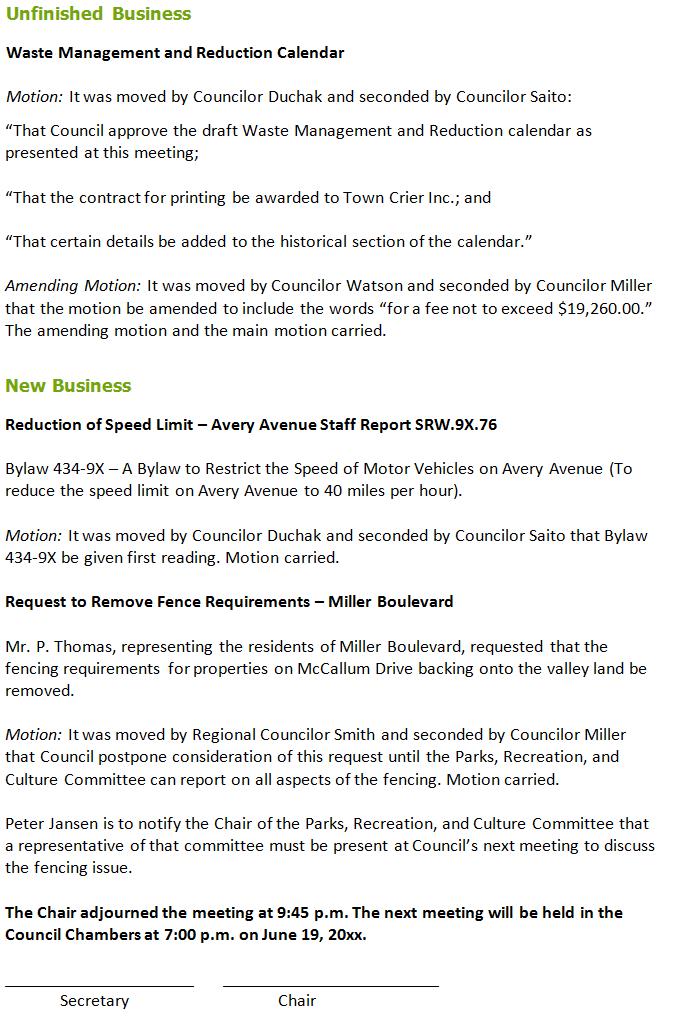 Previous Topic
Back to Lesson
Login
Accessing this course requires a login, please enter your credentials below!
Lost Your Password?