Kohlberg’s Six Stages
Ethics, morals, and philosophy have been studied through the ages, and are as important now as they were in Plato’s time. Having some tools to approach questions is a helpful way to move toward decision and action.
In this session, you’ll work with ethics by looking at the smaller components – called stages and levels – that help to break them down.

The Six Stages and Three Levels
Model Overview
In the early 1950’s, psychologist Lawrence Kohlberg was a pioneer in the study of moral development. After over 20 years of study, he concluded that there are six main stages of moral development that fall into three levels. 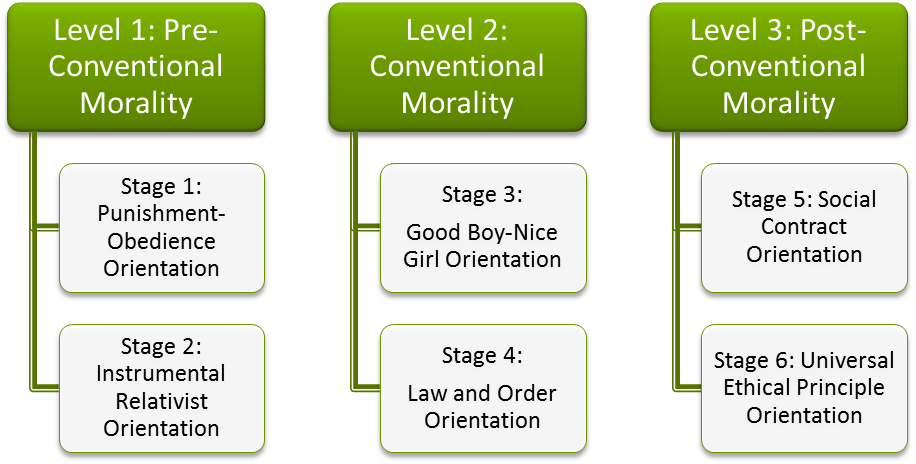 (This interpretation is taken from Moral Development: A Guide to Piaget and Kohlberg, by Ronald Duska and Mariellen Whelen.)
There have been entire books written on this theory, but for our purposes, it isn’t necessary to go into the deep ramifications of this study. Let’s summarize Kohlberg’s findings for you.

Level One: Pre-Conventional Morality
During these two stages of moral development, the person sees rules as something imposed on them. Moral decisions also often self-centered and based on the possible consequences of an action. Fear is often the motive for actions.
Children are often at these two stages in their early years. For example, a child may know not to harm their sibling because s/he will get in trouble and there will be unpleasant consequences.

Level Two: Conventional Morality
During these two stages of moral development, the person sees rules as something to be valued in and of themselves. The norms of their family, friends, and peers override the individual’s motivations.
Teenagers are often at these stages; they will do something because their friends are doing it and it is a cultural norm. Adults are often at this stage as well; they will behave in a certain way because it is how they have been raised or in accordance with the law.

Different Levels for Different Situations
We should note that a person can be at different stages at the same time. For example, let’s say that Bob is committing minor theft at the office but he recently refrained from cheating on his spouse.
His logic for stealing at the office is, “It’s only a few pens and pieces of paper. No one will notice.” Bob is at Level One here; there are no consequences to stop his behavior. Without fear, there is no motivation for making an ethical decision.
However, his logic for not cheating on his spouse is, “Marriage is a sacred institution and must be respected at all times.” Bob is at Level Three here; theoretically, he could cheat and keep it a secret, avoiding punishment. (If he were at Level One, he may have made this type of decision.) He could also reason, “All my friends are doing it; it’s almost the norm these days.” (If he were at Level Two, he may have made this type of decision.) Instead of his decision being governed by threats of punishment or societal norms, he made an independent decision based on a pre-existing moral principle.
Previous Topic
Back to Lesson
Login
Accessing this course requires a login, please enter your credentials below!
Lost Your Password?