Minute Styles
In formal organizations and committees, it’s common to use a formal minute style. However, many meetings involve committees and smaller groups, where the minutes can be framed differently.
In this lesson, you’ll explore different formats for minutes, including formal, informal, and action minutes.

Choosing a Style
Minutes are a permanent, formal record of what went on in a meeting. Their purpose is to provide members of a group with:

When approved, minutes are considered legal documents and can be used in legal proceedings.
Minutes may be written in a variety of styles, including formal, informal, or action. The choice of style is based on the nature of the meetings and the bylaws of the members themselves.

Formal Minutes
Formal minutes support a meeting which is governed by a chair according to a parliamentary code or procedure. There are a number of reference guides to parliamentary procedure, such as Robert’s Rules of Order or Procedures for Meetings and Organizations. An organization’s use of a particular procedure is normally outlined in their bylaws.
Semiformal or Action Minutes
Semiformal or action minutes are used by small groups who do not have a clearly defined operating structure.

Things to Consider
Minutes don’t have to be verbatim to be proper, with the exception of motions, which should be recorded word for word. Word for word documents are too time-consuming to prepare and to read. However, groups differ as to how much detail they require. Some groups want minutes to be an outline of everything that was discussed so they have justification for decisions. Others feel that background information is not essential, providing members understand the remarks.
It is important that you, as minute-taker, know what type of minutes the group expects to receive and can deliver them consistently. For example, a committee concerned with public hearings relating to changes in municipal bylaws can choose one of two styles:
Comprehensive minutes with a detailed rationale for every decision.
Minutes that are concise, with the rationale “passed in accordance with Section 345 of the Zoning Bylaw.”

Informal Minutes
Small groups, perhaps because of their size, sometimes prefer to operate more informally. However, minutes are still a vital component of the meetings.
Informal minutes support meetings that operate on a modified version of parliamentary procedure. They report what occurred at the meeting for the people who were absent and for future reference. They summarize the action taken, the action planned, the people responsible, and the deadlines.
Informal minutes are written in a narrative format with complete sentences. They include some background information, since they are written solely for the benefit of people already familiar with the group and its activities.

Action Minutes
Action minutes are best suited for meetings that operate in a purely conversational manner. They can be written in point form. You need to identify the person or people responsible for future actions and set time limits.
In many informal meetings, the minute-taker is encouraged to participate in discussions, or the chair may also act as minute-taker. In some groups, members share the responsibility of minute-taker with a different person appointed for this task at each meeting.
In such situations, action minutes are typically the easiest to use. They allow you to make notes as well as participate, and the straightforward format keeps the minutes consistent despite the different people involved.
NOTES EXAMPLE: 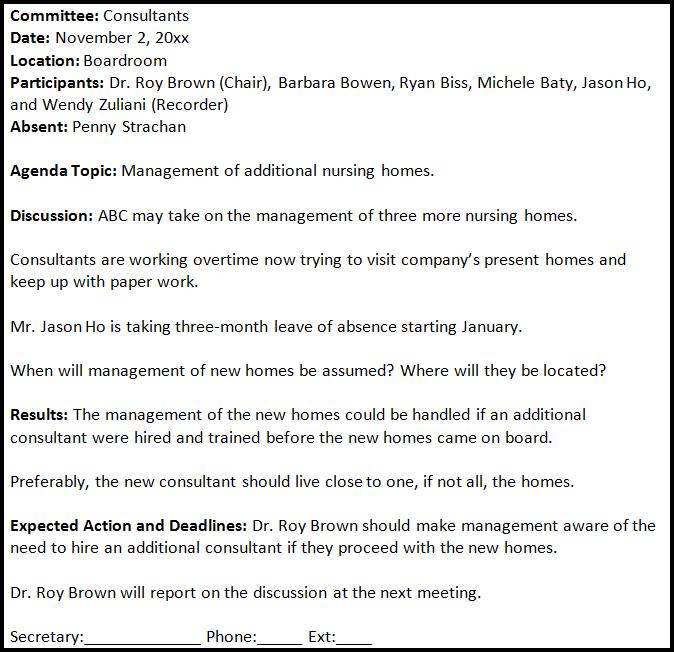 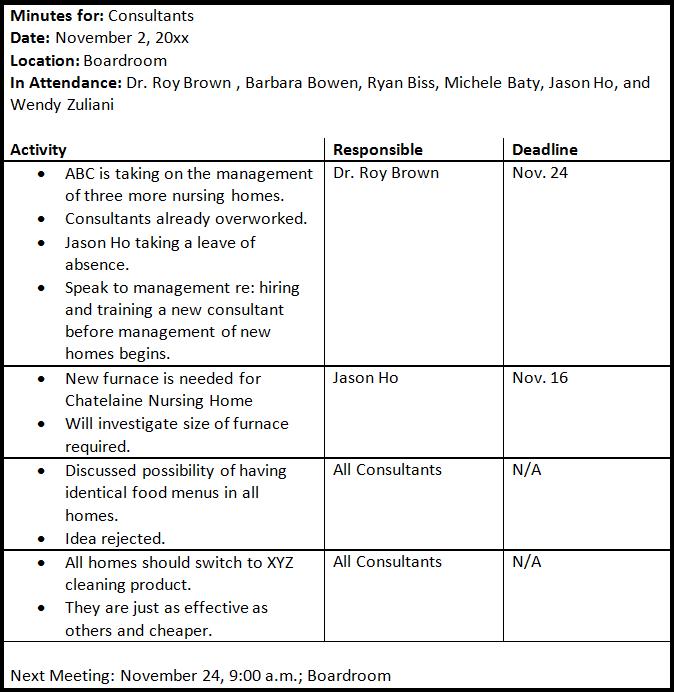 Previous Lesson
Back to Lesson
Login
Accessing this course requires a login, please enter your credentials below!
Lost Your Password?